Home / About Us / History

First known as the Spring Lake Clinker Boat Company, Barrett’s was for many years the oldest continuing business firm in Spring Lake. Even before the boat works was founded in 1887, this site had already become one of the most historically significant in Spring Lake.

Some people claim that one of the boat works’ original buildings, which later was torn down, was used as early as the 1830s as a trading post. At one time, Barrett’s sales office [a brick building at the back of the property, also demolished] was located in the former office used by the Cutler & Savidge Lumber Company, which had run sawmills on this site. Hunter Savidge later traded a sizeable piece of land to the Clinker Boat Company [the name changed to Barrett’s in 1896] in exchange for a bit of boat work.

For many years, another Barrett Boat Works building, the Barber Street School, was maintained on this site by the firm. The school, which was relocated to 102 West Exchange, also had served as a gymnasium, an opera house, and a clubhouse for the original Spring Lake Yacht Club. 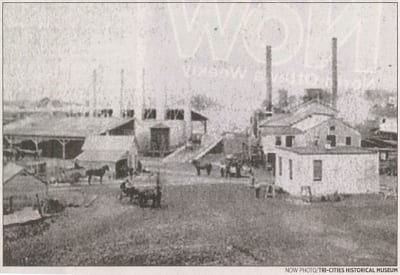 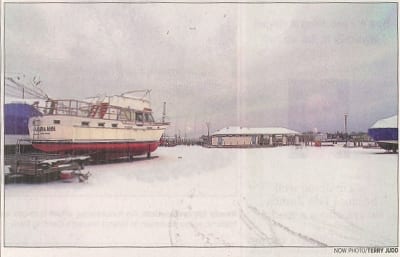 In the early days, the company made “Clinker-Built” rowboats for pleasure, hunting, and fishing. Built according to Harrison C. Pearson’s patented model, these boats had hulls formed by overlapping external planks, which allowed them to be swiftly and safely propelled through the water. They were constructed from the highest quality pine, white oak, mahogany, and cherry, and retailed for $25 to $125. Barrett’s has one of the Clinker boats still on the premises to this day.

Barrett’s produced large numbers of sailing craft until the 1930s, when the last vessel, the Tomahawk, was made. Although it ceased manufacturing boats, Barrett Boat Works continued to provide facilities for storage and repair, as it had since its beginning. It also carried boats from other makers, such as Chris Craft.

In the 1950s Paas Bros. sold Briggs & Stratton engines at their shop here. In 1961 Dr. Jack Jordan, a Grand Haven dentist, bought the property while retaining the business name. He expanded the building, including an office and ships store. When Jordan died, the property went to his sons, Jeff, and James (Mitch). The sons presented Barber Street School to the Village as a gift, and that was when the building was moved to Exchange Street.

Eventually, Mitch became the sole owner of the business and ran the marina for several years, doing many improvements and renovations. In 2003, Mitch sold the marina to Chris Lisowicz (whom is also the owner of North Shore Marina). Being a team with North Shore Marina (who used to be a competitor) proved to be a valuable asset. Chris did many improvements through the next couple years including new docks, buildings, bathrooms and pool/pavilion.

Plans for the future include new floating docks, building renovations and more. Barrett’s has proven to be a vibrant and growing business and will continue to provide boaters with all their boating needs.